“Who am I to judge” – The Pope’s comments on gay people, a PR stunt or a good start? 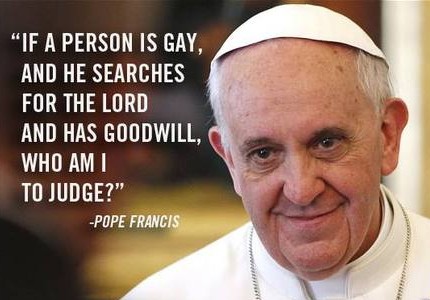 This week Pope Francis visited Brazil and during an 80-minute press conference aboard the flight back to Rome he made a statement that quite rightly made international headlines. Here’s what he said – word for word:

“If a person is gay and seeks the Lord and has goodwill, who am I to judge that person? The Catechism of the Catholic Church says these persons must never be marginalized. They must be integrated into society”. Interestingly although he was speaking in Italian he used the English word “gay”.

When I first heard these remarks I have to be frank with you as a proud gay person I was cynical. I found myself wondering was this just a PR stunt on behalf of the church to try and repair its battered and bruised image? I wasn’t surprised to learn that many others in our global LGBT community felt the same. Could you blame us given that his predecessor Pope Ratzinger had called homosexuality an “intrinsic moral evil” and described homosexual acts as “grave sins” and “intrinsically immoral.”

These comments no matter how momentous they are, they are not enough to heal the hurt the Catholic Church has caused to millions of lesbian, gay, bisexual and transgender people around the world. Their intolerant teachings have been instrumental in deteriorating the quality of life of the global LGBT community as they have torn families’ apart, prompted people to commit violent attacks against defenseless individuals and led countless others to depression and even driven some to self-harm and suicide.

I was born a Roman Catholic, grew up in Rome, not too far from the Vatican and as a young girl I went to a Catholic school. My parents were deeply religious and have yet to accept me for who I am in this world. So I speak from experience when I say I know first-hand what impact the Pope and the Catholic Church has on the lives of gay people as I personally suffered the turmoil and anguish that LGBT people have to overcome in their journey to self-acceptance and well-being.

However, the more I thought about the Pope Francis’s comments I came to the realization that they come as a breath of fresh air and that members of the LGBT community and indeed all those who believe in human rights and equality, should welcome and praise them. The remarks are a welcome departure from past comments and, with this statement, the pope sets a new tone that speaks to tolerance rather than rejection. But that’s all there is to it so let’s not get carried away. The statement does not change Catholic teachings, which still views homosexuality as a sin, and people with such tendencies cannot become priests.

The Popes comments have already had a positive impact and many have predicted that they herald the beginnings of change in conservative Italy. For those who might not be unaware Italy is years behind virtually all other Western European countries when it comes to offering civil partnerships for gays and lesbians or having legislation protecting them from discrimination and homophobic violence. Rocco Buttiglione, a leading figure in the pious Christian Democrats party also backed the Pope’s comments as he was quoted as saying: “Regarding the gays, the Pope has confirmed the doctrine of the Catholic Church.” but added that he was in favour of a new law against homophobia, because “homosexuality is not a crime and the person must be protected.” Preparations have begun to introduce legislation against homophobic abuse by the end of the summer.

So although the Popes words have not changed the Churches stance on homosexuality – his words are being widely accepted to carry that all important message of tolerance and live and let live… with an estimated 1.2 billion Roman Catholics in the world who pay attention to what the Pope has to say… I personally have shed the cynicism and feel hopeful that this is a great start!

So that’s what I think but what do you think? Were you pleased to hear these comments that mark a new beginning? Or do you think that the Pope was out of order and should retract them immediately as they are being taken out of context?